Acknowledge, Accept, and Refocus: the Practical Application of Meditation. 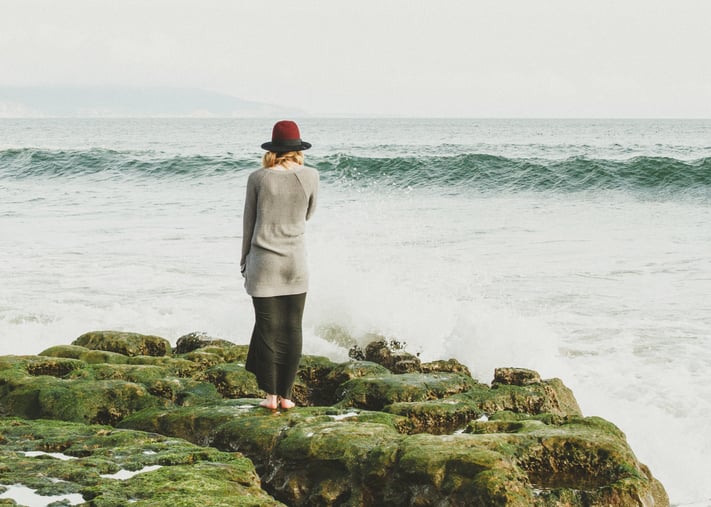 Step 11: “Sought through prayer and meditation to improve our conscious contact with God as we understood Him, praying only for knowledge of His will for us and the power to carry that out.”

Like many family members experiencing the impact of alcohol and drug addiction, my head was very busy. It was always, always thinking. Sometimes it was thinking about the person I loved, and wondering if they were okay. Sometimes it was trying to think of a way to help us to break free of the awful destruction that was happening in our lives. Sometimes it just wanted to escape for a while, and would find a way to distract itself. The bottom line is that I wasn’t present to anyone or anything other than addiction, and my brain was never, ever quiet.

When I first found support in a group for family members who loved someone who struggled with addiction, I found it very confusing. I knew they knew what my life was like, because they shared some of the details of their own. They had similar experiences to mine! But, there was something different about these folks. They seemed calm and peaceful. Some of them were downright happy. I didn’t know how that was possible. How does someone experience what I was experiencing and feel anything other than miserable?

Luckily, I was brave when I was new, and I asked people questions. The most frequent one I asked was “Why are you okay?!” It seemed relevant! The kind people in family recovery would answer my questions, and shared many commonalities. One of the things I heard repeatedly from the people I spoke to who seemed the most at peace was that they practiced meditation.

What I knew about meditation at the time was that you needed to sit in the lotus position and chant, and if you did it right you might levitate. Of course, I didn’t know what any of that meant! I was concerned that meditation was a “new age” phenomenon, and I wasn’t sure how I felt about that. Also, I was convinced I wouldn’t be able to meditate, as I’m a fairly chatty gal, and sitting quietly for any length of time had never been appealing to me.

I discovered that in its most simple definition, meditation is a deep concentration of the mind. It’s being present to what is in front of you. It’s being aware of what’s happening around you and internally. It’s about acceptance of this moment exactly as it is.

I tried a variety of different mediation types, and had nominal success with the process until I found a meditation teacher. This person taught me a way of meditating that resonated with me in a deeper way than anything else I had tried. I was able to find some space in my busy mind. I was able to connect to my Higher Power as part of the process. Sometimes I would experience a profound sense of well-being. At other times, answers about questions I was grappling with would come to me in the quiet. Although I wasn’t originally convinced that I would be able to, I had found a way to meditate. And, I felt more centered than I could ever remember being before.

One of the practices I was taught in meditation was to stop judging what was happening. In meditation I was told that if a thought bubbled into my head that was different than my meditation focus, I shouldn’t judge the thought, or judge myself (like I was prone to do – “See!! I told you I couldn’t meditate!!). Instead, I was directed to acknowledge the thought, and then gently bring my awareness back to my meditation focus. It wasn’t about doing this perfectly. It was about bring myself back to my focus when I strayed.

Imagine my surprise when I realized that this could carry over to the times that I wasn’t meditating. When some sort of drama or crisis happened in my life, and unfortunately there were still many instances of those happening at the time, I found I didn’t have to judge that, either. Instead, it was helpful to acknowledge what was happening (as it’s always helpful to accept the truth of a situation), but then to bring my focus back to who I wanted to be in that situation, and how I wanted to show up. I didn’t have to be caught up in the swirl of the crisis. I could simply bring my attention and awareness to the recovery process I was in, and how I wanted to respond to the situation. I could make a choice not to get caught up in the reactions I had experienced in the past. And, again, it wasn’t about doing this perfectly. It was about bring myself back when I strayed.

Over the years my meditation practice has changed, but this one key component has remained the same: acknowledge, accept, and refocus – all without judgment. I often wonder if this is what was originally implied with the wording of Step 11. Regardless, I’m grateful today, and every day, to have found a way to live out my meditation in my daily life.

Join Sherry on a retreat the weekend of September 29th-October 1st, 2017!

I will be facilitating a “Sought through Prayer and Meditation: an 11th Step Retreat”.