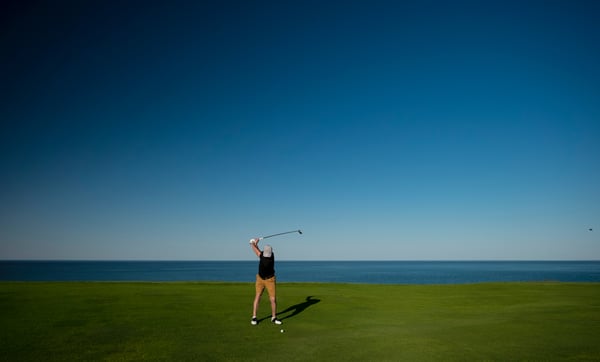 Recently during the U.S. Open a professional golfer swatted at his golf ball while it was moving. He knowingly did this in violation of the rules that govern golf. In a subsequent tournament another professional golfer took a drop with a golf shot that was controversial at best and which some of his fellow players characterized as cheating. Both of the situations were unfortunate and sullied the reputation of both players. It is said that golf doesn’t build character – it reveals it.

In a recent golf tournament with a fellow member of the program I had a downhill putt for birdie. Making the putt would have guaranteed that we would win the hole. My playing partner counseled me to be aggressive with the putt because we couldn’t lose the hole, all we could do is win or tie. I steadied my nerves, inhaled deeply, exhaled and struck the putt. It raced five feet past the hole. I strode over and picked up the putt and proceeded to our cart.

While in the cart we discussed the previous hole and realized we had made an error in our calculations. The second putt (the five-footer) was not conceded and had to be made in order to tie the hole. We had mistakenly picked up the putt. My playing partner, after a short discussion said, “We messed up – they won the hole”.

As disappointed as I was with this announcement, I knew he had made the right call. He is a man of honor and integrity and he wasn’t willing to sacrifice his integrity for the sake of a golf match. The game ended in a tie and my partner and I walked away from the 18th green not with the satisfaction of having won, but with the personal satisfaction of having done the right thing.

Integrity is a principle of the program that one develops by working steps four through ten. Through the process of conducting a fearless and morale inventory, telling someone our wrongdoings and faults, admitting our shortcomings, asking for God’s help with our character defects and then facing the people we have harmed and making amends, we develop integrity. We develop the ability to look people in the eye and to face difficult situations with character and grace. As it says on page 84 of the book Alcoholics Anonymous, “We will lose interest in selfish things and gain interest in our fellows. Self-seeking will slip away. Our whole attitude and outlook upon life will change. Fear of people and of economic insecurity will leave us. We will intuitively know how to handle situations which used to baffle us.”

It is said that golf doesn’t build character – it reveals it.So too, the 12 Steps of the program of Alcoholics Anonymous can reveal a life based upon the principles of:loyalty, discipline, responsibility, compassion, service, honesty, and integrity.