On Thanksgiving Day I am Grateful. 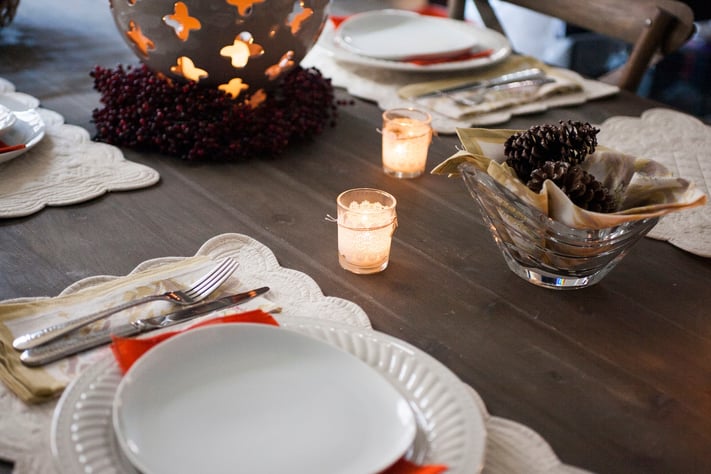 I always liked Thanksgiving Day as a child. My early years were dominated by violence and the fear of more violence. My mom would hit me anywhere and everywhere, even right in front of a policeman. The only routine exception was inside a Catholic Church, but we were only there for an hour.

Thanksgiving Day, once a year, was completely free from fear. Thanksgiving Day was held at my Uncle Bob’s house, in upstate New York. I had two sisters. Uncle Jack and Aunt Martha had one daughter, and Uncle Bob and Aunt Evelyn and seven children. There was a great big Thanksgiving dinner with eleven children and eight adults in the family, plus friends of Bob and Evelyn dropping by.

My maternal grandfather presided: John Joseph Moran, accompanied by my grandmother, Bessie. He drank, but did not seem to have a problem with his drinking. I always remember him with a glass of “Old Grandad” and a cigar. He was a happy man. He sold ladies’ shoes and had the gift of gab. He made a good living and was friends with many of the ladies who came into the store where he worked.

On Thanksgiving Day, he was very much the family patriarch, and his rule for the day was: “Let the children play, it’s Thanksgiving.” When my drunken mother was about to spin out of control again and attack us, he would just shoot her a look. With a tone of irritation that was entirely unlike him he would say a single word: “Betty!” and she would stop in her tracks, and not hit us.  It is sixty years later, and I am still grateful to him.

By the grace and power of God, the chain of family violence is broken. I didn’t beat my children. I also didn’t love them as well as I could have, because I was still drinking during much of their childhood, but I gave far better than I got. Today, my daughters are excellent mothers, and my grandchildren live in happy homes with two loving parents each. For that, I am thankful.

On Thanksgiving Day, my wife will be with my younger daughter and her family in San Antonio, and both of us, both daughters, and all three families will be together there at Christmas. I will be in Washington DC in December when my oldest granddaughter graduates from college. On Thanksgiving Day and Thanksgiving weekend, I always try to do something to show gratitude for the gifts of recovery and the ways in which my life is so much better now than it was before.

On Thanksgiving Day, I will be at The Retreat, meeting with guests as usual. Our staff members create a great turkey dinner, and I’ll be sharing in it with our guests. Thanksgiving night, I’ll be going with friends from the Summit Hill AA group in Saint Paul to carry the AA message to the Ramsey County Detox in Saint Paul. Thanksgiving weekend, I’m leading a three day retreat at the McIver Center at the Retreat for survivors of abuse and trauma. I do some lectures, and we spend much of the time simply speaking to and listening to each other, sharing our stories and upholding each other. I did this retreat once before and it was very helpful to those who were there.

AA’s Big Book says that our stories disclose, in a general way, what life was like, what happened, and what we are like now. My own story shows me that since I have been willing to take the Twelve Steps of AA every day, my life has gotten better, and the lives of children and grandchildren have gotten better, and improved more than I could ever imagine. For all of that, I am grateful.

For More Information about The Retreat - Download our FREE Brochure!