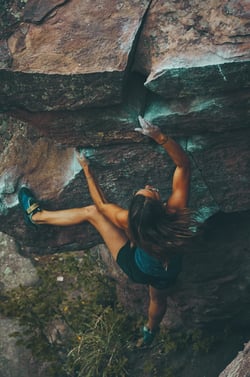 I always learned that the cure for any hurdle was to “try harder.” Struck out in Little League? TRY HARDER next at bat. Low grade on a test? STUDY HARDER next exam. Didn’t close the sale at work? TRY HARDER next customer. The message was to keep doing what you’re doing…but TRY HARDER! Can’t stop drinking? TRY HARDER. When I tried as hard as I could to stop drinking and using drugs and found that I could not on my own will, I tried harder in other areas of my life. Surely success in those areas would offset my utter failure to control and enjoy my drinking! That logic seemed unbeatable. But experience taught I am not. And thus the great paradox of recovery reared its beautiful head in my life. To make progress, to find sobriety, to find happiness, I had to STOP TRYING. (WHAT??)

But, it must be explained that I am spiritually, uh…stupid. I also suffer from spiritual ADHD. My spiritual hearing leaves me needing spiritual hearing aids the size of the International Space Station. Lastly, and equally sad, my spiritual vision could only be described non-existent. So I learned to depend on my acutely functional physical senses to get me through spiritual hurdles. And when they didn’t yield the expected results, TRY HARDER I did.

A sponsor in a previous sobriety suggested I might be the type of alcoholic who needed to work ALL 12 steps. He was referring to Step 11 at the time, but experience taught me that it was really step 1 I was skipping. No matter how much I could TRY HARDER on the other steps (honesty requires me to admit that my TRY HARDER was marginal at best), I would return to drinking every time as my dependence continued to be on human senses, rather than on spiritual ones.

I had to BELIEVE that no amount of effort could keep me sober. No matter what level of success I saw in other areas of my life, my physical faculties, although God given, could not keep me sober. It was in that concession, that I STOPPED TRYING and admitted defeat to my inner-most self, that part deep inside my soul that is of God. I told a truth He has always known. I am an alcoholic and cannot beat alcoholism alone.

Alcoholism is a shrewd and persistent salesman whose unrelenting tactics kept me begging for more.

However smart, however resilient, however clever I think I may be, alcoholism always wins. It is through this admission that my relationship with God began.