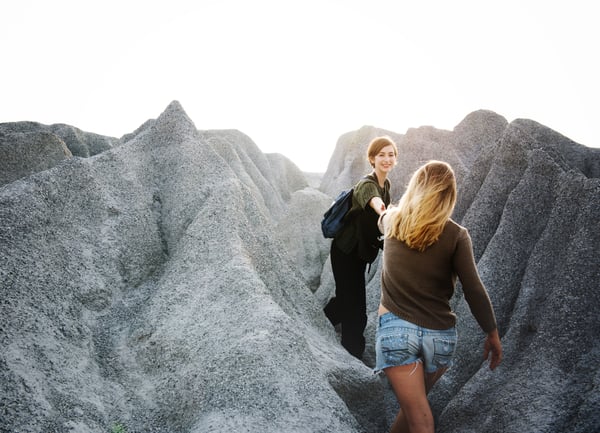 My drinking got me kicked out of school; it got me into trouble with the law; I was put on probation; I was court ordered to counseling and I was fighting constantly with my parents. I hated what I was doing to them and I loathed what I was doing to myself, but I didn’t know how to stop. I finally got honest with my probation officer one day and she suggested I go to a Young Peoples A.A. meeting.

I walked into my first A.A. meeting when I was fifteen years old. I was terrified. Everyone in there was so old - they had to be in their twenties or thirties at least! They offered me some coffee, invited me into the room and then let me be. Nobody got in my face. No one played twenty questions with me. No one confronted me. They just let me listen. When it came time to introduce ourselves I said “pass”. A couple of people smiled, but no one said I had to give my name or say I was an alcoholic. I wasn’t ready for that and they could sense it.

After the meeting they invited me out for coffee. I said I didn’t have enough money for coffee and they said it was OK. After coffee they gave me their telephone numbers and told me if I needed to talk, if I wanted to drink, if I needed a ride to a meeting, I could call them 24/7 and they would be there. That was my first introduction to A.A.

I went to meetings for two more weeks, but then I relapsed. There was a fatal flaw in my program. I was on the 1-1-1 plan. I was going to go to one meeting, once a week, for one hour.

I came back to the Young Peoples meeting and told them I slipped. They said what was most important was that I was there and to keep coming back until the miracle happened. Again, no one shamed me or blamed me – they just loved and accepted me into sobriety.

Unfortunately, I discovered I had another fatal flaw in my A.A. program – I wasn’t willing to give-up the faces and the places. I thought I could hang-out with my old friends, go to the old parties and not drink. That lasted for two-weeks and then I slipped again. I thought I had hit bottom, but then I found out that bottom has a basement.

In this new bottom I finally took the First Step. I fell to my knees with tears streaming down my face, I looked to the heavens and said, “God please help me, because I can’t do this anymore”. And like a fever breaking I felt the obsession and craving for alcohol dissipate and I haven’t had a drink since.

This time I went back into the rooms of A.A. with renewed vigor. I was willing to follow directions. I put aside my half measures. Members in my home-group suggested I get a sponsor and so I did. I asked my sponsor how many meetings I should go to a week and he replied, “How many days a week did you party?”

I got involved with service-work by signing up for meetings. I volunteered to make coffee; to be a meeter-greeter; and to go on 12th Step calls. I got in the middle of A.A. because my sponsor told me it was the safest place to be. He said if you’re on the merry-go-round and you don’t want to fall off – get in the middle.

My sponsor encouraged me to start going to conferences and roundups. I attended the International Conference of Young People in A.A. (ICYPA.A.) when it came to our state. I even started another Young Peoples meeting in our area.

What my sponsor knew and I understand now was the importance of action and more action. It is so important to be involved with other young people in A.A. and to give back to others.

Today I am still involved with A.A. I sponsor other young men coming into the program; I take meetings into treatment centers, and I give back that which was given so freely to me. But perhaps best of all I remember what it was like coming into my first A.A. meeting as a young person. How different I thought I was from everyone else because I was so young. I remember how frightened I was and how accepting and non-judgmental the other A.A. members were of me. I remember how they loved and accepted me into sobriety and I try to practice their example today in all my affairs.